Whereas: The City of Troy, New York was home to the Sentinel newspaper, which published the poem “Account of a Visit from St. Nicholas” for the first time ever on Dec. 23, 1823; and

Whereas: The poem, containing some of the most popular and beloved verses in the English language, was first submitted and published without author attribution; and

Whereas: “A Visit” established a distinctly American holiday figure, later known as Santa Claus, as a “jolly old elf” with a belly that “shook when he laugh’d like a bowl full of jelly,” entering homes “Down the chimney” to deliver gifts to children, and flying through the night in a “miniature sleigh,” pulled by “eight tiny reindeer” each given names; and

Whereas: Authorship of this American classic has been long attributed to biblical scholar Clement Clarke Moore of Manhattan, but an equally compelling case for authorship belongs to Hudson Valley gentleman farmer Major Henry Livingston, Jr. of Poughkeepsie; and

Whereas: On Dec. 18, 2013, Troy attorney E. Stewart Jones, Jr. and attorneys Jack Casey of Troy and his daughter Molly Casey, argued the case for each author respectively before a judge and jury in a mock trial held in the Rensselaer County Courthouse; and

Whereas: The jury was unable to come to a consensus.

Now, therefore, I, Lou Rosamilla, Mayor of the City of Troy, do hereby proclaim that Dec. 23, 2013, is Clement Clarke Moore & Henry Livingston, Jr. Day in Troy, New York, in recognition of our city’s role in holiday history and in recognition of Troy author Duncan Crary, Gramercy Communications, the Rensselaer County Historical Society, The Theater Institute at Sage, and all others who helped put this historical holiday whodunnit back into the national spotlight. 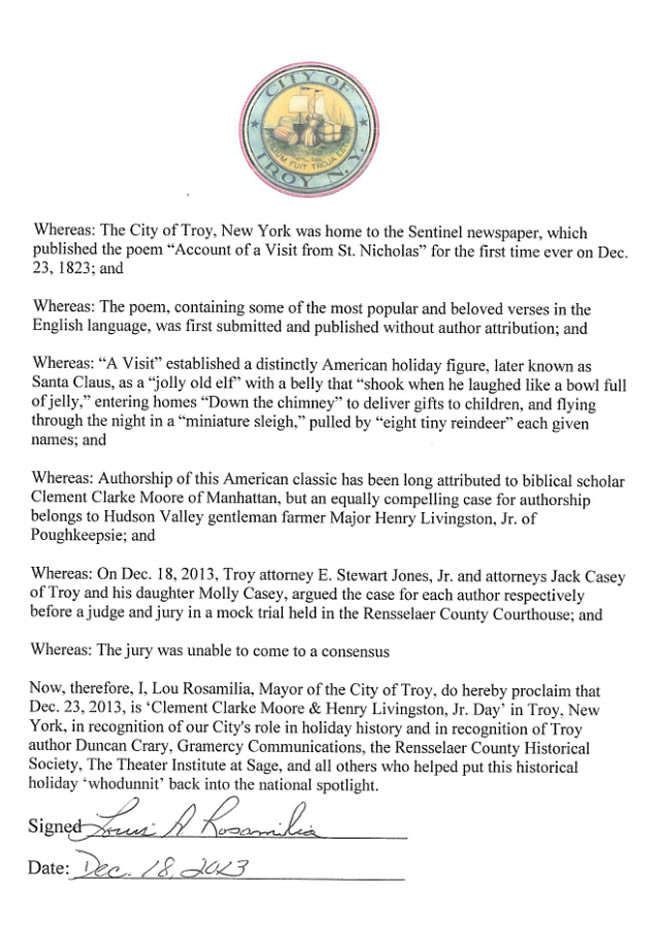