"The Trial Before Christmas" has made news around the world, at local, regional and national levels. Notable reporters covering the case included: Pete Williams, justice correspondent for NBC National News, Joanne Kaufman of The Wall Street Journal and Jimmy Vielkind of Politico.

Other major outlets included mental_floss magazine, FindLaw, New York Law Journal, and Brownstoner. An article by the Associated Press was syndicated by hundreds of local tv stations, radio news programs and newspapers across the country. On-site television coverage by WNYT News Channel 13 and Time Warner Cable News was also syndicated across the nation by local affiliates. One local print journalist was inspired to report on the proceedings in rhyming meter.

In 2022, "The Trial Before Christmas" was adapted into a Hallmark Channel movie, "'Twas the Night Before Christmas," which inspired a new round of media attention and brought this homegrown story to a nation audience once again.

Attorney Jack Casey and Duncan Crary appeared on Talk 1300 AM’s Franco and Friends show to speak about Who Wrote “A Visit from St. Nicholas”? – The Trial. December 16, 2013

“Who really wrote “‘Twas the Night Before Christmas”?” By Innae Park, Time Warner Cable News, December 19 , 2013 (Syndicated on TWC affiliates across the country)

“‘Twas a night with no verdict: Mock trial to decide who the classic poem ends in hung jury,” by Bryan Fitzgerald, Times Union, December 19, 2013.

“Livingston v Moore: The Trial to Decide Who Wrote ‘A Visit From St. Nicholas’,” by Stacy Conradt, mental_floss, December 19, 2013.

“Will the real author please stand up! Livingston vs Moore, Round One.” By Don Rittner, December 19, 2013.

“’Twas the Night Before Christmas’ set for mock trial to argue authorship,” by Cheryl K. Chumley, The Washington Times. December 17, 2013

The Trial Before Christmas is much more than the sum of its parts. It's a joyous, raucous and brilliant celebration of all things Christmas and all things Troy. It has the potential to be a holiday classic, every bit as much as A Christmas Carol or The Nutcracker Suite. Except it's uniquely ours, and that's what makes it so special.

"Troy courthouse tussle is all for Christmas fun. Drama aims to get to the bottom of origin of classic holiday poem," by Larry Rulison, Times Union, Dec. 5, 2014 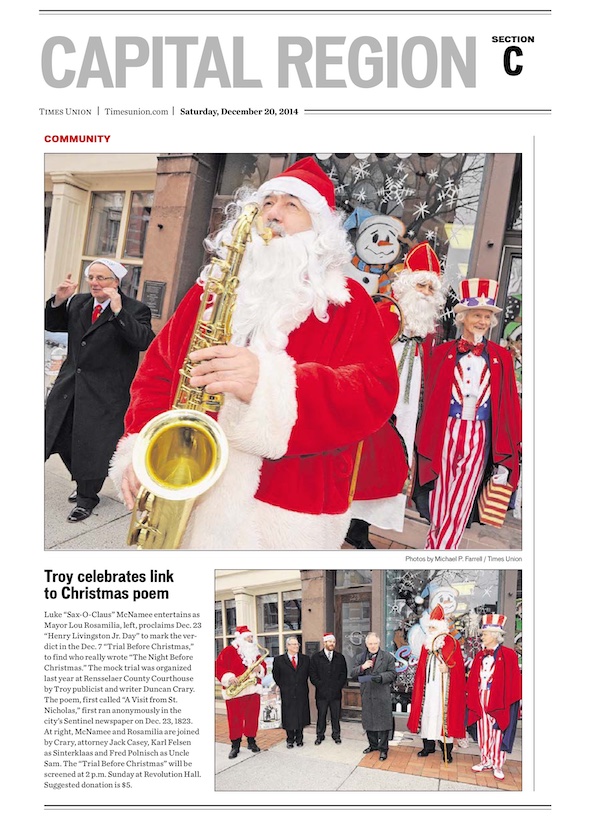 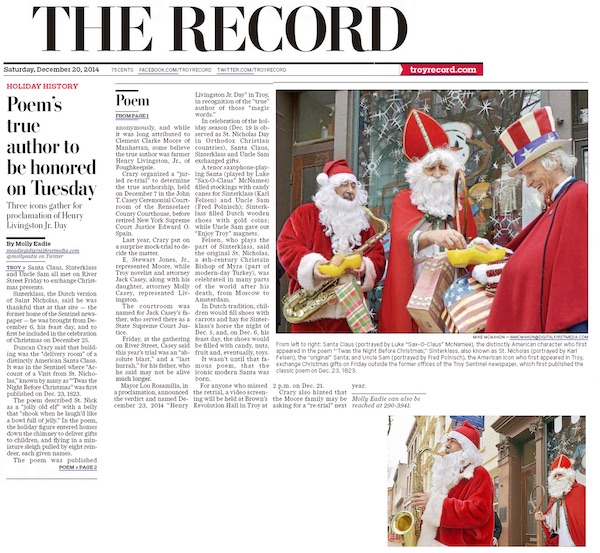 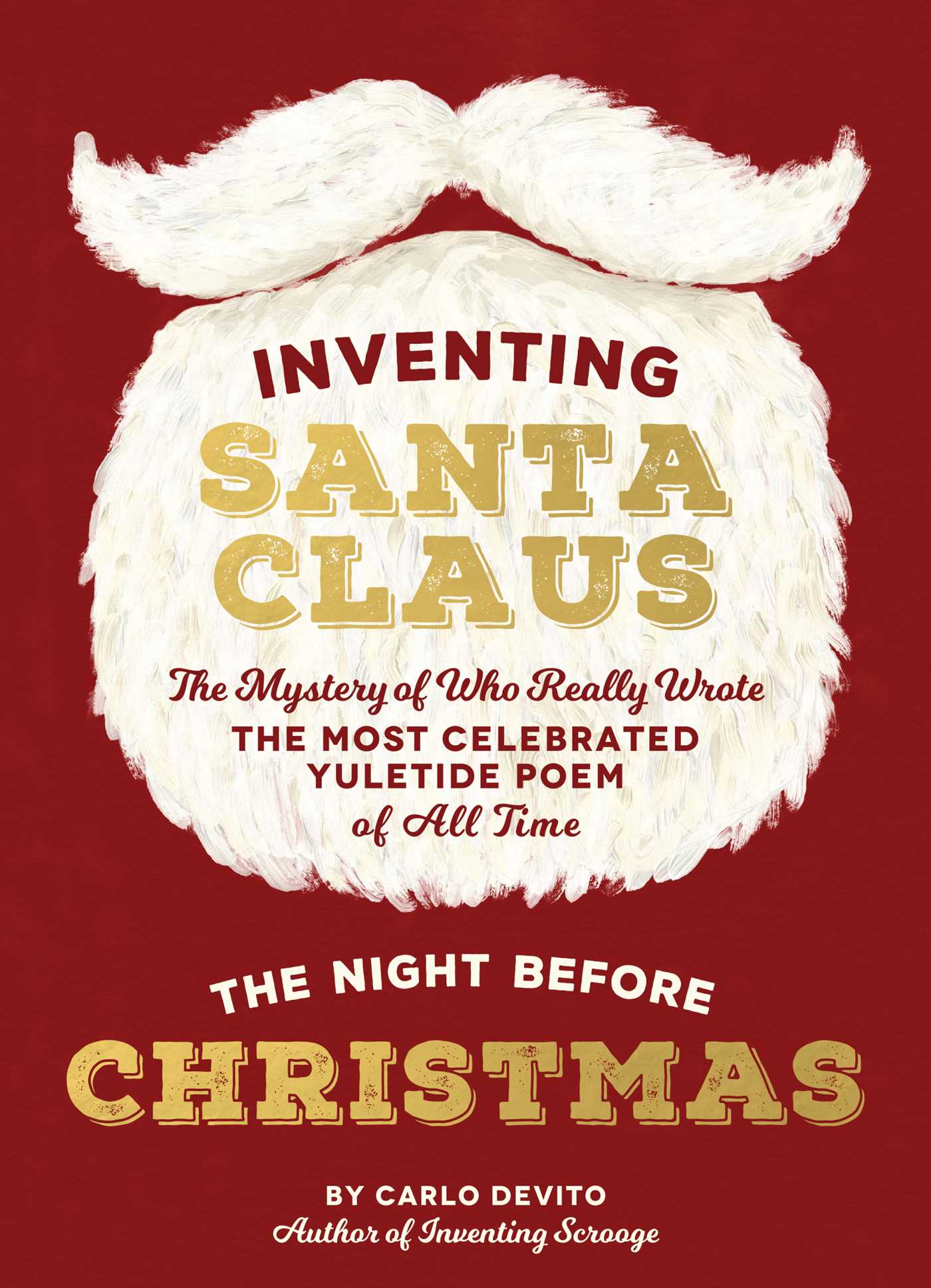 "Inventing Santa Claus: The Mystery of Who Really Wrote The Most Celebrated Yuletide Poem of All Time | The Night Before Christmas," by Carlo DeVito, Cider Mill Press, 2017 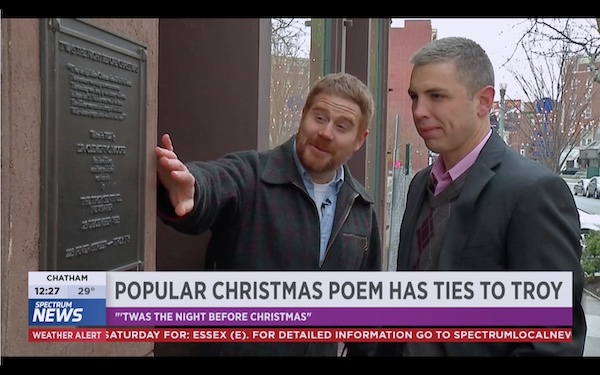 "How 'Night Before Christmas' got its start in Troy: The famous poem soon will celebrate its 200th anniversary," by Joyce Bassett, Times Union, Dec. 21, 2020

Find the outliers.
Even the very traditional Hallmark sometimes hits upon a concept that is strangely brilliant... 'Twas The Night Before Christmas (Dec. 17), which is described thusly: "A former actress trying to break into directing tests her skills with a Christmas Eve courtroom production in which the true authorship of the famous poem 'A Visit from St. Nick' is debated." It's mock trial? About a poem? On Christmas Eve? Who pitched that in a meeting? "Boss, hear me out. It's Christmas Eve in a small town. A woman has big Hollywood dreams. Enter ... some lawyers."

"Who wrote '‘Twas the Night Before Christmas'? The jury is still out," by John McFarlandl, Oil And Gas Lawyer Blog, December 12, 2022

"Hallmark movie based in Troy to premiere December 17," by Jessie House, December 14, 2022

"Torrey DeVitto & Zane Holtz Debate Who The True Author of 'Twas The Night Before Christmas' Really Was in Hallmark's New Movie," JustJared, December 17, 2022 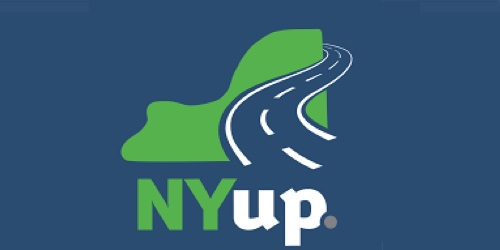 My favorite movie of the 2022 season! This is the most inventive, interest(ing) Christmas plot I believe I have ever seen. I love the research and information on Clement Clark Moore and Henry Livingston Jr. and the etymology of the famous poem about St. Nick. The inner workings of the production of a play seemed real life, with producer’s opinions, improvisation, missing in action actors, actors struggling with how to act, and the play’s longevity. Torrey DeVitto and Zane Holtz are fantastic actors. Their chemistry is beyond explosive!

It has all of the elements I look for in a good Christmas movie. First, the story is so unique. It was fun learning about the history of this poem through the play. And without giving things away, let’s just say that there are some magical moments in the play that make this movie fun.

The chemistry between Torrey and Zane is great, but the real treat was seeing this production being re-created for the channel.

Well, you can't say this two-hour TV movie wasn't ambitious! And it definitely gets points for that.

10. "'Twas the Night Before Christmas"
This is a Hallmark movie that tries to throw its arms around a lot of ideas -- it's about two people falling in love while staging a play that debates the authorship of "A Visit from St. Nicholas," and the ghost of Clement Clark Moore shows up -- but it all somehow comes together, thanks mainly to the chemistry between leads Torrey DeVitto and Zane Holtz.

The script incorporating Livingston and Moore is genius.