Metroland: The Trial Before Christmas

THE TRIAL BEFORE CHRISTMAS

Troy author and publicist Duncan Crary is reprising The Trial Before Christmas, this Sunday (Dec. 7) at 2 PM in the John T. Casey Ceremonial Courtroom in the Rensselaer County Courthouse, which sits at the corner of Fulton and Second in downtown Troy.

You don't want to miss this. Trust me on this one.

The Trial is part moot court, part history lesson, and part hysterical improv comedy, all wrapped around the very real mystery and intrigue surrounding the authorship of "The Night Before Christmas." The venerable poem was first published anonymously in the Troy Sentinel in 1823. Some years later, as the fame of the poem spread, a wealthy and prissy Manhattan biblical scholar named Clement Clark Moore claimed to have written it. Some years after that, descendants of Hudson Valley farmer Henry Livingston, Jr. announced that Livingston was the true author. This has been a matter of serious debate ever since; scholarly books supporting each side have been published just in the past five years.

So, where better to settle the score than in a Troy court-room, mere steps away from where the poem was first published? Taking the side of Moore is superstar attorney E. Stewart Jones, Jr., one of finest lawyers in the country, a third-generation Troy lawyer, running the family firm that's been around for 115 years. When Stu lays it down (and he will), he makes Atticus Finch sound like Pee Wee Herman. And his droll wit is staggeringly funny. Wet-your-pants funny.

Representing Livingston is Troy lawyer, award-winning novelist and modern Renaissance man Jack Casey; the son of retired judge John Casey, for whom the courtroom is named. Like Jones, Casey knows (and has lived) Troy legal lore (and there is a lot of rich Troy legal lore) and can match Jones' depth-charge asides with erudite zingers of his own. Jack's daughter Molly, herself a lawyer, shares the legal duties and wisely, given the firepower in the room, plays straight person and keeps the proceedings on track. Retired State Supreme Court judge Edward Spain shall preside, or at least try to. 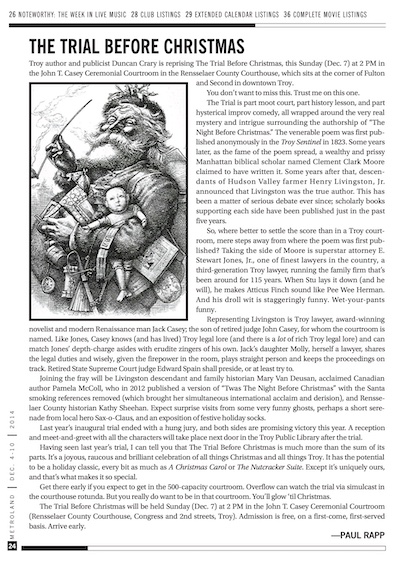 Joining the fray will be Livingston descendant and family historian Mary Van Deusan [sic], acclaimed Canadian author Pamela McColl, who in 2012 published a version of "Twas The Night Before Christmas" with the Santa smoking references removed (which brought her simultaneous international acclaim and derision), and Rensselaer County historian Kathy Sheehan. Expect surprise visits from some very funny ghosts, perhaps a short serenade from local hero Sax-o-Claus, and an exposition of festive holiday socks.

Last year's inaugural trial ended with a hung jury, and both sides are promising victory this year. A reception — and meet-and-greet with all the characters will take place next door in the Troy Public Library after the trial.

Having seen last year's trial, I can tell you that The Trial Before Christmas is much more than the sum of its parts. It's a joyous, raucous and brilliant celebration of all things Christmas and all things Troy. It has the potential to be a holiday classic, every bit as much as A Christmas Carol or The Nutcracker Suite. Except it's uniquely ours, and that's what makes it so special.

Get there early if you expect to get in the 500-capacity courtroom. Overflow can watch the trial via simulcast in o the courthouse rotunda. But you really do want to be in that courtroom. You'll glow 'til Christmas.