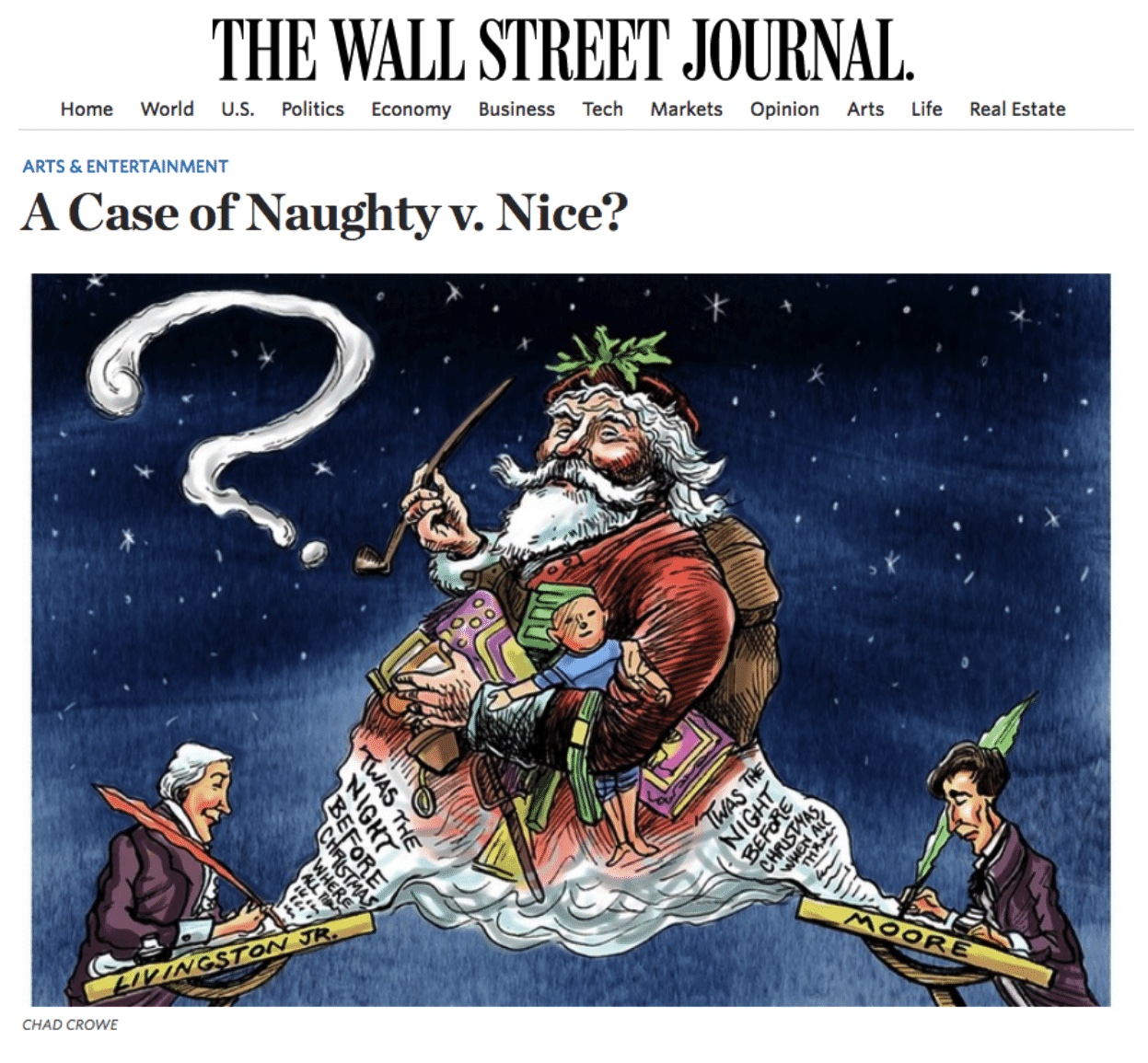 'Twas the week before Christmas and 500 spectators packed the Rensselaer County Courthouse for a mock trial to establish who really wrote "'Twas the Night Before Christmas."

First published anonymously in a local newspaper, the Troy Sentinel, in 1823, the 56 buoyant lines of anapestic tetrameter also known as "A Visit from St. Nicholas" have long been attributed to Clement Clarke Moore (1779-1863), a dour biblical scholar. The matter seemed settled when, in his 1844 collection "Poems," Moore included those extraordinarily popular verses about stockings hung with care and children tucked snug in their beds. There's even a bronze plaque on the outside of the former Sentinel building that (hark) heralds Moore's achievement.

But for about 150 years, members of the Livingston family have insisted that their forebear Henry Livingston Jr. (1748-1828), a big-hearted Hudson Valley farmer, poet and artist, was the true author of the poem that introduced Santa Claus as we know him: a bearded, big-bellied, jovial chimney crawler.

They've gotten a bit of support from Vassar professor Don Foster, author of the book "Author Unknown: On the Trail of Anonymous." "Moore was a wealthy curmudgeon who might well have served as a model for Dickens' Ebenezer Scrooge," Mr. Foster wrote in an email. "Livingston was a merry old soul who, if he were alive today, might well don a red suit and play Santa without missing a beat."

As tales of alleged literary credit-grabbing go, perhaps this doesn't quite rank with the long-simmering Marlowe-Shakespeare debate. But Duncan Crary, a gregarious public-relations consultant, history buff and Troy tub-thumper, scented the possibilities. "The plaque credits Moore, and I later found out there was a controversy about who wrote the poem and thus a controversy about who invented Santa," said Mr. Crary, 35, noting that his cherished burg was also the supposed birthplace of Uncle Sam, the durable symbol of the U.S. government, thanks to a butcher named Sam Wilson who supplied provender to the troops during the War of 1812.

"This is a very small city," Mr. Crary added. "But we gave rise to two national symbols. I'm always trying to engage people with Troy's incredibly rich past."

Thus the case of Livingston v. Moore with retired judge Bernard "Bud" J. Malone presiding, and six jurors chosen at random from the crowd to make sure justice was done. Forget voir dire. This was voir reindeer.

The battle lines were drawn early with Molly Casey,co-counsel for the plaintiff, comparing Moore to the Grinch. "Stop him from stealing Christmas year after year," she implored with nicely done theatricality.

"This is the most frivolous, fraudulent, phony case since the Legs Diamond prosecution," was the deadpan retort—to chortles from the gallery—of the defendant's counsel, E. Stewart Jones Jr. , whose grandfather successfully defended the notorious gangster during his 1931 trial, right here in Troy, for kidnapping and torture.

"It wasn't until Moore passed away that greedy Livingston descendants tried to capitalize on Moore's success," thundered Mr. Jones—two parts Jimmy Stewart, one part Gene Hackman—banging on a table for emphasis.

And so it went for a two-hour trial that was considerably more sitcom than courtroom drama. "I think that Mr. Casey may be leading the witness and putting words in the witness's mouth," said Mr. Jones at one point, registering his disapproval of the plaintiff's chief counsel, Jack Casey (Molly's father). "I realize that's a time-honored tradition in this courtroom but—"

"Yes," agreed Justice Malone, who, like the lawyers involved, took part in the proceedings pro bono. "And in recognition of the longstanding practice, your objection is overruled."

There was expert testimony from a local historian; character assassination (Moore was, for a time, a slave owner); amateur psychologizing (if Moore was the poem's author, why did he wait so long to say so publicly? If Livingston was the author, why did he never say so publicly?). And because of certain changes made in the poem after its original publication, there were questions about Moore's knowledge of Dutch and German. In summation: semantics and some antics. And some surprise witnesses.

"I would like to call back from the dead the ghost of Henry Livingston," Mr. Casey announced.

"Well, your honor," said Mr. Jones, "many a witness has left the witness stand in this courtroom wishing they were dead. But I have never heard, even in this city, a witness coming from the dead to testify. So I object."

Given the long-rumored participation of legions of the deceased in civic life, Mr. Casey was ready with a rebuttal. "If they can vote in Troy," he snapped, "they can testify in Troy."

Apparently so they can, for so they did. When the ghost of Henry Livingston (played by local actor Brian Sheldon ) disappeared in a mist of seasonally appropriate green, Mr. Jones, jingling a circlet of sleigh bells, did his own summoning from the great beyond: The ghost of Clement Moore (impersonation courtesy of actor David Bunce ).

Closing arguments made, Judge Malone gave the jurors tidings of comfort and joy—"You are free to reject any and all of the evidence"—and 10 minutes to deliberate. Meanwhile, a saxophone-playing Santa tootled "Winter Wonderland" and "It's Beginning to Look a Lot Like Christmas" for the crowd.

Among them was Jeff Buell, 34, a real-estate developer and lifelong Troy resident. "We pride ourselves on the history of the city," he said, "and on our ability to have a good time."

Suddenly, a hush fell over the courtroom. The jury was back. "We are unable to reach a verdict," the foreman announced.

"Not the first time in Rensselaer County and not the last," said Judge Malone. A subsequent poll of the jury indicated that it was four to two in favor of the Livingston camp. "None of Moore's other poetry had the rhythm pattern of 'Night Before Christmas,'" said jury member Don Rittner, a historian who lives in Schenectady, noting a discrepancy that wasn't addressed during the trial.

Fellow juror Cynde McCoy, an interior designer, wasn't buying it. "I heard no evidence that supported the plaintiff," she said. "Moore had four copies of the poem in his possession. Livingston had none."

Keeping with the Yuletide spirit, Mr. Casey viewed the case as a gift that will keep on giving. "Your honor," he said. "We would like a retrial next year."

Ms. Kaufman writes about culture for the Journal.